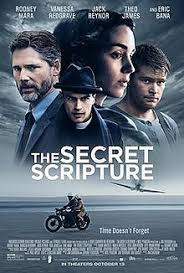 Review: An elderly Irish woman named Roseanne McNulty is living in a mental institution, a psychiatrist, Dr. Grene comes to examine her. He learns more about her past in the process.
Director: Jim Sheridan
Actors: Theo James, Aidan Turner, Rooney Mara, Vanessa Redgrave, Eric Bana, Susan Lynch, Jack Reynor, Adrian Dunbar, Tom Vaughan-Lawlor, Laurence O’Fuarain, Nika McGuigan, Pauline McLynn, Omar Sharif Jr., Elva Trill and Charlie Kelly
Year: 2016
Genre: Art House, International, Drama and Romance
Conclusion: 3/5
Based on a novel by Sebastian Barry with the same title. This has had quite a lot of mixed reviews from film critics. I really enjoyed it and thought it was really unusual. It was a completely different film to what I thought it was going to be like. As always Vanessa Redgrave gave a fantastic performance considering she didn’t have much to work with. This has to be one of her strongest performances and I honestly felt moved by watching her. Rooney Mara carried the film and was just the right actress to play that part. She was very convincing. She was cast in the film once Jessica Chastain dropped out. I did think that Aidan Turner was going to be in it a lot more than I thought he would. He only makes cameo appearances but when on screen he does bring the story to life. Fantastic to get such a strong cast together for such a small independent film. Irish actor Jonathan Rhys Meyers was originally cast as the priest but dropped out after the project was delayed and Theo James replaced him. It is a shame that it is so hard to find as I could only get it on Netflix. The scenery is beautiful to look at despite the film’s bleak story-line. There are many themes in this film but the ones that stood out for me were the subjects of death, isolation, betrayal, love, dignity and redemption.