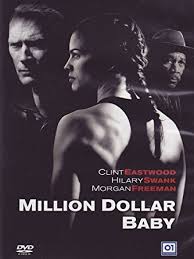 Review: A determined young woman works with a hardened boxing trainer in order to become a professional. At first he doesn’t think much of women boxers plus he thinks that she is too old at 31 and experience and technique. An emotional bond develops between them both.
Director: Clint Eastwood
Actors: Clint Eastwood, Hilary Swank, Morgan Freeman, Jay Baruchel, Mike Colter, Brian F. O’Byrne, Anthony Mackie, Margo Martindale, Riki Lindhome, Michael Pena, Benito Martinez, Bruce MacVittie and Joe D’Angerio
Year: 2004
Genre: Drama, Romance and Sport
Conclusion: 4/5
The film is based on three short stories from Jerry Boyd (F.X. Toole), “The Monkey Look”, “Million $$$ Baby” and also “Frozen Water”. The author passed away a month after learning that Clint Eastwood had signed on to make a film out of his work. A superb performance from Clint Eastwood. This is a very brutally bleak and moving drama. In the final third of the film it takes a shocking turn which gives it unexpected depth and immense power. Morgan Freeman gives an impressive performance. Hilary Swank also gives a terrific performance. While she was training for this film she contracted a bacterial infection from a blister she developed on her foot. It was so serious that she nearly had to be hospitalised for three weeks. To prepare for this film she had to undertake serious training schedule. Due to her workouts she gained nearly 20 pounds of muscle. In the Radio Times Guide to Films 2016 it states “This is Clint’s film, both as its tortured hero and as a great director”. At the Academy Awards in 2005 this won 4 Oscars. They were for Best Motion Picture of the Year, Best Performance by an Actress in a Leading Role (Hilary Swank), Best Performance by an Actor in a Supporting Role (Morgan Freeman) and Best Achievement in Directing (Clint Eastwood). At the Golden Globe Awards in 2005 this won for Best Performance by an Actress in a Motion Picture – Drama (Hilary Swank) and also for Best Director – Motion Picture (Clint Eastwood).