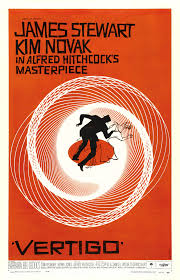 Review: A San Francisco detective realises he suffers from vertigo, which is a condition resulting in a fear of heights. He retires from his position and then takes on another case by his old college friend. It is to follow his friend’s wife around who is apparently depressed. At the same time he becomes dangerously obsessed with her.
Director: Alfred Hitchcock
Actors: James Stewart, Kim Novak, Barbara Bel Geddes, Tom Helmore, Henry Jones, Raymond Bailey, Ellen Corby, Konstantin Shayne and Lee Patrick
Year: 1958
Genre: Classics, Drama, Mystery, Romance and Thriller
Conclusion: 5/5
When first released this was dismissed; it is now heralded as one of Alfred Hitchcock’s finest films. According to Hitchcock, this is his most personal project. The word “Vertigo” is only spoken once and that is near the beginning of the film. This is an adaptation of a French novel D’entre les morts, which is about obsession and deceit. I love the score by Bernard Herrmann, which gives the film a real hypnotic atmosphere. A new print of Vertigo was released in 1996, restoring the original picture’s colours and the San Francisco backdrop, as well as digitally enchanting the soundtrack. This is the first film ever to use computer graphics. Kim Novak gives her greatest performance while James Stewart presents a disturbingly dark and layered characterisation. There is a 25 year age difference between James Stewart and Kim Novak, who were 49 and 24 years. As good as Kim Novak’s performance was, Alfred Hitchcock originally wanted Vera Miles to play Judy. She became pregnant so therefore was unavailable. Scottie’s (James Stewart) apartment actually exists; you can find it near Fisherman’s Wharf (corner of Lombard and Jones street) in San Francisco. In 2012, Vertigo replaced Citizen Kane (1941) in the Sight & Sound critics’ poll for the greatest film of all time. In the Radio Times Guide to Films 2016 it states that “This remains one of the most painful depictions of romantic fatalism in all of cinema”.