THE NIGHT OF THE HUNTER 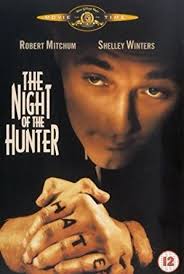 Review: Ben Harper is imprisoned with theft, Harry Powell, a phony preacher learns that Ben has hidden a huge sum of money in which he’d stolen in a robbery, $10.000, somewhere near his home. Eventually Powell marries Willa who is Ben Harper’s widow. Willa has two children who are reluctant to tell Powell where the money is hidden.
Director: Charles Laughton
Actors: Robert Mitchum, Shelley Winters, Lillian Gish, James Gleason, Evelyn Varden, Peter Graves, Don Beddoe, Billy Chapin, Sally Jane Bruce and Gloria Castillo
Year: 1955
Genre: Crime, Drama and Film-Noir
Conclusion: 5/5
Adapted by James Agee from a novel by Davis Grubb. This is Charles Laughton’s only film as a director and is one of the great masterpieces of American Cinema. It features Robert Mitchum’s finest screen performance. In this he plays a character who has got a dreamily terrifying presence. Charles Laughton gives superb direction, but is even more impressive when you find out that he intensely disliked all child actors. It is reported that he did find that in the end he did work well with the young lad but did not get along with the girl. Later on in life, Robert Mitchum, said that Charles Laughton was his favourite director and indicated that this was his favourite of the movies in which he had acted. The musical score is incredible and so is the cinematography. Set during the depression era in rural America. This very much has its chilling moments. For instance we shall never forget Powell’s nocturnal silhouette on horseback as seen by the young son protagonist from a distant hayloft while he hears the villain faintly singing “Leaning on the Everlasting Arms”. The film is a brilliant good-and-evil parable. The main theme in this is how religion can be used for good or evil. Sadly this never found an audience but is now regarded as a classic.