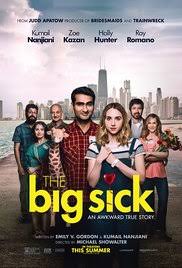 Review: Based on the real-life relationship between Kumail Nanjiani and Emily V. Gordon. He is a Pakistan-born comedian and she is a white grad student. Life starts to get rather complicated as Kumail is expected to marry a Pakistan girl and his parents are traditionally Muslim. Kumail and Emily start clashing over culture clashes. She suddenly is in hospital with a mysterious illness and he has to face her parents.
Director: Michael Showalter
Actors: Kumail Nanjiani, Zoe Kazan, Holly Hunter, Ray Romano, Anupam Kher, Zenobia Shroff, Adeel Akhtar, Bo Burnham, Aidy Bryant, Kurt Braunohler, Vella Lovell, Myra Lucretia Taylor, Jeremy Shamos, David Alan Grier and Ed Herbstman
Year: 2017
Genre: Comedy, Drama and Romance
Conclusion: 4/5
This is a fantastic little film but I didn’t think it was good or as funny as I was expecting it to be. Don’t get me wrong I still really enjoyed it and was still impressed with the film.  It was released in the U.S. on Kumail and Zoe’s 10th wedding anniversary.’ I found this to be very much true to life. This is produced by Judd Apatow who worked on Bridesmaids (2011) and Anchorman (2004). The screenplay is actually written by Kumail Nanjiani himself and his wife Emily V. Gordon and they spent three years writing the script. At times this did remind me of  films such as Annie Hall (1977), When Harry Met Sally (1989) and also Notting Hill (1999). This is very much an ensemble cast. Everyone in it had their fair share to play. Before actress Zoe Kazan, auditioned she watched videos of Kumail and Emily so this could help her get a better understanding of them and their characters. The themes that occur in this are life, death, relationships, religion, stability and family. It is a film full of heart and soul.