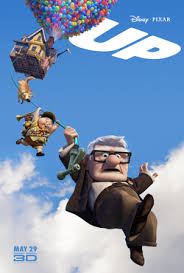 Review: Carl Fredricksen is a 78-year-old balloon salesman and ties thousands of balloons to his house. One day he sets out to fly to South America. He finds he isn’t alone in his journey as an excitable eight year old boy named Russell attaches himself to Carl.
Director: Pete Docter and Bob Peterson
Actors: Edward Asner, Jordan Nagai, John Ratzenberger, Christopher Plummer, Bob Peterson, Delroy Lindo, David Kaye, Jess Harnell and Josh Cooley
Year: 2009
Genre: Action, Adventure, Animation, Comedy and Family
Conclusion: 4/5
This is a wonderful film for all ages to sit down to and enjoy. Suitable for young children although there might be a few scenes in this that they might find scary. It is a very funny and poignant film and also a film which is full of life. The animation is designed so well and they use really colourful details that blend into the film so well. This is so moving that when the team were planning the storyboard form and also the married life sequence that opens the film it brought members of the production team to tears. Just some of the themes that occur in this are having to deal with old age and the fact of getting older, others include isolation, friendship, love and having to explore. At the Cannes Film Festival in 2009 this won the Palm Dog award (Dug). At the Academy Awards in 2010 this won two Oscars. They were for Best Achievement in Music Written for Motion Pictures, Original Score and also Best Animated Feature Film of the Year (Pete Docter). At the Golden Globe Awards also in 2010 this also won 2 awards. They were for Best Original Score – Motion Picture and also Best Animated Feature Film. At the Bafta Awards also 2010 Michael Giacchino won the award for the Anthony Asquith Award for Film Music and also for Best Animated Film (Pete Docter).
http://www.imdb.com/videoplayer/vi84149017?ref_=ttvi_vi_imdb_25