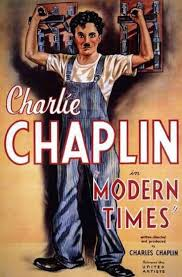 Review: A Tramp struggles to live in modern industrial society. He gets help from a young homeless woman.
Director: Charles Chaplin
Actors: Charles Chaplin, Paulette Goddard and Henry Bergman
Year: 1936
Genre: Classics, Comedy, Drama and Family
Conclusion: 5/5
Apparently a full dialogue script was written for this film, as Charles Chaplin had intended to make a complete talkie. This took 10 months to film, October 1934-August 1935. This was considered fast work for a Charles Chaplin film. In 2003 a screening of the film closed the Cannes Film Festival. One of the high points at the festival was after the screening an empty seat was illuminated by a spotlight in order to honour Charles Chaplin. The film was banned in Nazi Germany for “communistic tendencies”, although some said it was due to his resemblance to Adolf Hitler. The BBFC insight into this film is that there is no material likely to offend or harm. Film critic Barry Norman quoted in his Guide to films in 2016 that “Naïve this may be, but what else could Chaplin do? He was in the business of redemption and this was the only way out he could find in darkening days”.