GUARDIANS OF THE GALAXY VOL.2 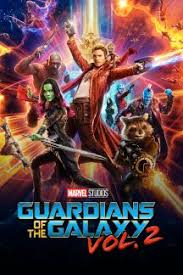 Review: The team continue on their adventures as they unravel the mystery of Peter Quill’s true percentage. They are also fighting to keep their newfound family together.
Director: James Gunn
Actors: Chris Pratt, Zoe Saldana, Dave Bautista, Vin Diesel, Bradley Cooper, Michael Rooker, Karen Gillan, Sylvester Stallone, Kurt Russell and Elizabeth Debickiying
Year: 2017
Genre: Action, Adventure, Comedy, Fantasy and Sci-Fi
Conclusion: 3/5
Here we are again after 3 years of the first Guardians of the Galaxy. The trouble with this is that there is nothing really new or original. Not as exciting as the first one. I didn’t find it as funny or as charming. I suppose if you just accept it for what it is then yes you will enjoy it and it is still fun to watch. It is well over 2 and a half hours which it didn’t really need to be. Like most films that are over 2 hours there could easily be scenes in it that could have been cut or just shortened. I did enjoy the film more at the beginning than I did at the end. I felt it lost its way a bit. According to the VFX artists, Ego’s planet comprises a trillion polygons, and it is considered to be the biggest visual effect ever made. As good as the visual effects are, you could say that there is just a bit too much C.G. used and also too much going on at once. Chris Pratt has reportedly said that reading the script for this helped him come to terms with his own father’s death. Zoe Saldana’s character does not like dancing. However, Zoe’s main profession is actually dancing, with ballet being her first passion. The main theme to the whole film is family. Again like the first film the soundtrack is brilliant, with a 70s and 80s soundtrack to it. It is great to see the cast back on form and you can quite clearly see how much they are enjoying making the film. No release date yet for vol.3, but earliest will be 2020, although The Guardians of the Galaxy will return in Avengers: Infinity War (2018). Look out for the original song of “Mandy” by Barry Manilow and Westlife!!