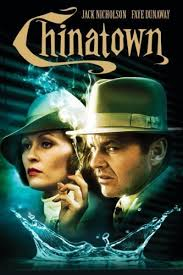 Review: Set in 1930s Los Angelis, a private detective is hired to expose an adulterer. He soon finds himself caught up in a web of deceit, corruption and murder.
Director: Roman Polanski
Actors: Jack Nicholson, Faye Dunaway and John Huston
Year: 1974
Genre: Classics, Drama and Thriller
Conclusion: 5/5
This is easily a film that could have been made in the 1940s. Jack Nicholson is perfect for this role and does it so convincingly. He just fits into the role so naturally. Faye Dunaway also gives a terrific performance. She plays a cool, elegant character. What we all remember in this film is Jack Nicholson’s bandaged up nose which was very convincing. This film is set in 1937, this is also the year that Jack Nicholson was born. The cinematography was brilliant. This film was intended as a fresh start for Hollywood. Roman Polanski has directed cult classics such as Rosemary’s Baby, 1968 and also Macbeth, 1971. He is one of the most acclaimed film directors in movie history. Sadly though after his success with Chinatown he was charged with sex with an under-age girl and also resulted in exile in Europe. Though for Jack Nicholson this was his breakthrough film and has gone on to be one of the most successful actors there has been. Apparently Polanski didn’t exactly endear himself to his stars. He threw Jack Nicholson’s portable TV set out of his trailer during an argument and after then proceeded to pluck a stray hair from Faye Dunaway’s head as it spoiling a shot. One of the most famous lines in this is “You know what happens to nosey fellows? Huh? No? Wanna guess? Huh? No? OK. They lose their noses.” This film has been released 3 times, it was classified X for cinema release in 1974, then 15 for video release in 1987 and then more recently 15 for cinema re-release in 2007.  At the Academy Awards in 1975 this won 1 Oscar and that was for Best Writing, Original Screenplay. At the Golden Globe Awards the same year it won 4 Awards. They were for Best Motion Picture – Drama, Best Director – Motion Picture (Roman Polanski), Best Actor in a Motion Picture – Drama (Jack Nicholson) and Best Screenplay – Motion Picture. At the Bafta Awards the same year Jack Nicholson won Best Actor for The Last Detail and also The Last Detail won for the Best Screenplay. Roman Polanski won the Best Director Award. In 2012 film critic Barry Norman produced a list in the Radio Times of the 100 Greatest films of all time and this was in the list.
http://www.imdb.com/video/screenplay/vi1220411673?ref_=ttvi_vi_imdb_2