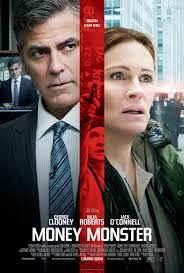 Review: A TV celebrity and financial host Lee Gates and his producer Patty are put into an extreme situation when they are held hostage by a disgruntled investor.
Director: Jodie Foster
Actors: George Clooney, Julia Roberts, Jack O’Connell and Dominic West
Year: 2016
Genre: Crime, Drama and Thriller
Conclusion: 3/5
A very entertaining and watchable film. This doesn’t go on for too long so you are never waiting for it to finish. It keeps its momentum going all the way through. Jodie Foster has done a fantastic job with the direction. Jack O’Connell is brilliant and can’t have been an easy role to do but does it so convincingly. One of his first films that he stared in was ’71 (2014). I wouldn’t say that it is a tense film. This film makes us reflect on the power of media and the power of human life vs money and loyalty.