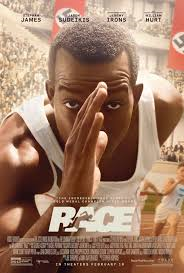 Review: A biographical drama about the athlete Jesse Owens. He made his name at the Berlin Olympics in 1936.
Director: Stephen Hopkins
Actors: Stephan James, Jason Sudeikis, Eli Goree, Jeremy Irons and William Hurt
Year: 2016
Genre: Biography and Drama
Conclusion: 3/5
A story which I knew nothing about before hand. I found it to be a very important subject. One that everyone should know about as this is a big part of history that has been forgotten about, by my generation. This is a very long film. I did find myself getting quite tired. As good as the film was, I did find that it was missing a certain spark but I can’t just put my finger on what it was. Would have worked better as a little mini TV series. Actor, John Boyega was attached to play Jesse Owens but dropped out due to star in Star Wars: The Force Awakens (2015). I do not blame him for his choice of film. I would have been a bit disappointed if I had gone to the cinema to see it. The themes that occur in this are courage, determination, friendship and tolerance. This film coincides with the 80th anniversary of the 1936 Summer Olympics.