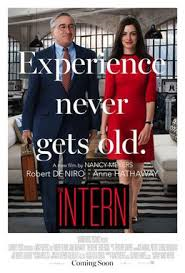 Review: Ben Whittaker is a retired successful business owner and widower. He decides that retirement isn’t for him and lands a job as an intern at a cutting-edge online fashion retailer.
Director: Nancy Meyers
Actors: Robert De Niro, Anne Hathaway and Rene Russo
Year: 2015
Genre: Comedy and Drama
Conclusion: 3/5
When this film came out, Robert De Niro was being interviewed by the Radio Times, and walked out half way through. If actors tend to walk out of interviews it generally means that the film is pretty awful. When sitting down to watch this I was literally expecting the worst, by the end I was pleasantly surprised and had enjoyed it. It obviously wasn’t a fantastic film but then there is nothing really wrong with it. The script is very well written and funny at times. It is not a Robert De Niro classic but in this his timing is brilliant. The other film that Nancy Meyers has directed that you will all know is The Holiday (2006). Reese Witherspoon was originally cast as Jules, but dropped out. Another film that is very similar to this and stars Anne Hathaway is The Devil Wears Prada (2006). There is a scene in this where Jules and Ben are watching a film. The film they are watching is Singin’ in the Rain (1952). The main theme in this is that maturity, wisdom and experience are still valued no matter how old you get. We can learn from one another and so can different generations.