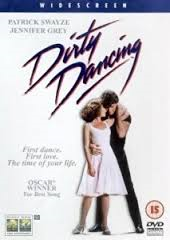 Review: A young teenage girl named Frances goes on a summer holiday with her family to a resort hotel in the Catskills. She falls in love with the camp’s dance instructor named Johnny Castle.
Director: Emile Ardolino
Actors: Patrick Swayze, Jennifer Grey and Jerry Orbach
Year: 1987
Genre: Drama, Musical and Romance
Conclusion: 4/5
A feel good dance drama. The dancing is the best dancing you will see in any film. This is the film that catapulted Patrick Swayze into stardom. It is a very predictable film. Also very heart-warming and very touching. When this was made it was intended as a low-budget filler but instead became a much loved blockbuster. Patrick Swayze and Jennifer Grey are both very well cast in this. Apparently Patrick Swayze had to convince Jennifer Grey to take up the female lead role. Both Patrick Swayze and Jerry Orbach died in 2004 of cancer. At the Academy Awards in 1988 this won one Oscar and that was for Best Music, Original Song. At the Golden Globe Awards in 1988 this won one award and that was for Best Original Song – Motion Picture. Apparently a remake of this is in production which will be directed by Kenny Ortega.