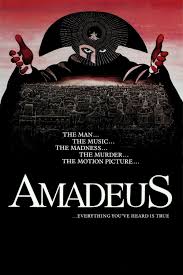 Review: The amazing story of Wolfgang Amadeus Mozart. This is told by his peer and secret rival Antonio Salieri. He is now confined to an insane asylum.
Director: Milos Forman
Actors: F. Murray Abraham, Tom Hulce, Elizabeth Berridge and Simon Callow
Year: 1984
Genre: Biography, Drama, History and Musical
Conclusion: 5/5
One incredible true story. One of the finest biographies ever to have been made. The music in this is outstanding. The costuming must have required a lot of thought and care. F. Murray Abraham actually learned to read and conduct music for his role. The original Broadway production to “Amadeus” opened at the Broadhust Theater on December 17th, 1980 and ran for 1181 performances starring Ian McKellen and Tim Curry. At the Academy Awards in 1985 this won 8 Oscars. They were for Best Picture, Best Actor in a Leading Role (F. Murray Abraham), Best Director, Best Writing, Screenplay Based on Material from Another Medium, Best Art Direction-Set Decoration, Best Costume Design, Best Sound and for Best Makeup. At the Golden Globe Awards the same year this won 4 Awards. They were for Best Director – Motion Picture, Best Performance by an Actor in a Motion Picture – Drama (F. Murray Abraham), Best Screenplay – Motion Picture and Best Motion Picture – Drama. At the Bafta Awards in 1986 this won 4 Awards. They were for Best Cinematography, Best Editing, Best Make Up Artist and for Best Sound. Film Critic Roger Ebert stated in his review “It is all there in Mozart’s deathbed scene: The agony of the older rival who hates to lose, who would lie and betray, and yet cannot deny that the young man’s music is sublime”.
http://www.imdb.com/video/screenplay/vi2535496985?ref_=ttvi_vi_imdb_1