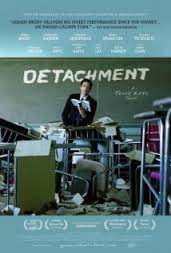 Review: Henry Barthes is a supply teacher who is quite disillusioned with the way his life is going. He drifts from classroom to classroom and finds it hard to find a connection with the students and teachers.
Director: Tony Kaye
Actors: Adrien Brody, Christina Hendricks and Marcia Gay Harden
Year: 2011
Genre: Drama
Conclusion: 4/5
Adrien Brody gives one of his best performances. There was only one main character and he carried it all the way through the film. It was never boring. You never looked at the time once to see how much of the film was left. This film has had mixed reviews from film critics. This is quite a disturbing film involving themes of violence and child prostitution. It is also a story about Henry Barthes’ search for personal redemption as he comes to terms with his relationship with his own father.