BACK TO THE FUTURE 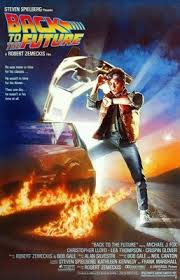 Review: Marty McFly accidentally gets transported 30 years into the past in a time-traveling DeLorean. This is done by his friend Dr.Brown who is an inventor. He now has to save Marty by making sure that his high-school-age parents unite.
Director: Robert Zemeckis
Actors: Michael J.Fox, Christopher Lloyd, Lea Thompson and Crispin Glover
Year: 1985
Genre: Adventure, Comedy and Sci-Fi
Conclusion: 5/5
Brilliant film and such a classic. The actor Michael J. Fox was the first choice to play the part of Marty but was unavailable at the time due to scheduling conflicts with his work on another film. He soon found a way to work on both films but for this film he was not allowed to go and do any promotional tours. The script was rejected 40 times before it was given the go ahead. At one point Tim Robbins was considered for the role of Biff Tannen. In this film there are only about 32 special effects shots in the entire film. At the Academy Awards in 1986 this won one Oscar and that was for Best Effects, Sound Effects Editing.
http://www.imdb.com/video/screenplay/vi252380953?ref_=ttvi_vi_imdb_1