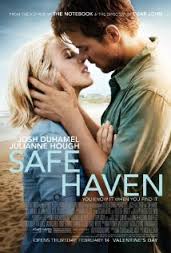 Review: A young woman with a mysterious past arrives in North Carolina. Dark secrets start to intrude on her new life and is forced to rediscover the meaning of sacrifice.
Director: Lasse Hallstrom
Actors: Josh Duhamel, Julianne Hough and Cobie Smulders
Year: 2013
Genre: Drama and Romance
Conclusion: 2/5
This film is based on a novel by Nicholas Sparks. Other works of his include The Notebook and Dear John. This is probably the weakest of his work. It was really slow to begin with. Very predictable as to what would happen at the end. You pretty much know what it involves with it being Nicholas Sparks. The lead role was offered to Keira Knightley but she declined. One film critic wrote about this film “Sparks’ field may be fertile, but it’s also rich in manure”.