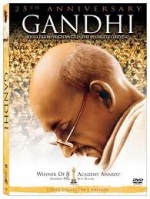 Review: This is a biography of Mohandas K. Gandhi. He was an Indian politician and a spiritual leader for the country.
Director: Richard Attenborough
Actors: Ben Kingsley, John Gielgud and Candice Bergen
Year: 1982
Genre: Drama, Biography, History and Classics
Conclusion: 4/5
One amazing true story about one man. At the Academy Awards this was up against E.T. Gandhi managed to win more awards but it is stated that E.T. is actually a much better film. Richard Attenborough did a fantastic job directing this film. The cast all did a superb job. Well filmed and a very beautiful looking movie. No studio was interested in financing this film. At the Academy Awards in 1983 it won 8 Oscars. They were for Best Picture, Best Actor in a Leading Role, Best Director, Best Writing, Screenplay Written Directly for the Screen, Best Cinematography, Best Art Direction-Set Decoration, Best Costume Design and for Best Film Editing. At the Golden Globe Awards the same year it won 5 Awards. They were for Best Foreign Film, Best Director-Motion Picture, Best Actor in a Motion Picture – Drama, New Star of the Year in a Motion Picture – Male and Best Screenplay – Motion Picture. At the Bafta Awards the same year it also won 5 Awards. They were for Best Actor, Best Direction, Best Film, Most Outstanding Newcomer to Leading Film Roles and Best Supporting Actress. This is one of Barry Norman’s Greatest British Films and also in the top 20 films that the public wanted on his top 100 films. One film critic wrote “Overshadowing even Ben Kingsley’s astonishing, transcendent performance in his first major screen role is a larger, more formidable presence: that of Gandhi himself “.
http://www.imdb.com/video/imdb/vi1044512793/